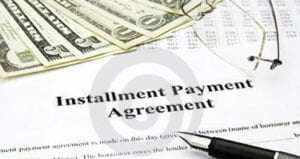 Aside from getting behind with the IRS in the first place, defaulting an IRS installment agreement can be among the most disastrous financial missteps a person can make.  Thus, knowing how to avoid a default and what steps to take in the event that you receive a cp523 default notice is must-know info for anyone on an IRS installment agreement or anyone considering entering into such an agreement.  I will cover what to know and what to do to below.

It all starts with an all too common scenario.  A business or household experiences financial struggles. Taxes become due, but there is no money available.  The Collection Division of the Internal Revenue Service enters the picture, demands payment, and makes it clear in no uncertain terms that it is willing to use its formidable powers to force payment if the tax liability is not resolved in short order.

After some careful consideration and ruling out other strategies (e.g. Offer in Compromise), it is determined that the best option is to attempt to secure an Installment Agreement with the IRS to resolve the tax liability by way of manageable monthly payments.  While this resolution avenue may not sound that difficult to accomplish, this misconception is quickly eliminated after going through the dreadful experience, which can sometimes take many months, of securing IRS approval of a reasonable monthly payment plan.  In the case of a business tax liability or a large individual tax liability, it can be far more challenging to secure affordable monthly payments than one might imagine.

The importance of securing affordable monthly payments cannot be overemphasized.  Many people feel pressured or bullied by the IRS into agreeing to make larger monthly payments than they can really afford.  They may not understand how to make a case for lower monthly payments or the available avenues of going up the chain of command within the IRS.  Consequently, they feel like they have no choice but to agree to an exorbitantly high monthly payment.  This is a huge mistake, and will often lead to default and possibly disaster.

Once a payment agreement with the IRS is secured, the terms must be satisfied.  This means that the monthly payments must be made on time and in full by the established due day all while ensuring that no additional liability accrues.  This task requires careful planning and financial adjustments.  Nonetheless, with the agreement in place, the debtor has a sense of relief as it is assumed that the IRS will no longer be breathing down their neck.

The monthly payments are maintained without any hiccups for a period of time and everything is going as planned, or so it seems, until one day an unexpected IRS correspondence is received in the mail. The IRS notice says in bold letters, CP523 notice of intent to levy intent to terminate your installment agreement.

How could this happen? This was not part of the plan.  It had taken several agonizing months to get the payment agreement approved in the first place.  The monthly payments were being made timely, current tax obligations were being paid in full and on time, and tax returns were being filed on time.  At least this is what the taxpayer thought.  Yet the CP523 notice arrives with no real explanation other than the terms of the installment agreement had not been adhered to.

After spending many hours scouring all available internal financial records and IRS payment confirmations, everything seemed to be accurate and correct.  A telephone call to the 800 number listed on the notice was made with the assumption that the IRS made an error.  After spending over an hour on the telephone with the agent that answered, some sort of minor tax infraction is revealed.  For example, federal tax deposits may have been a day or two late, a tax return may have been received by the IRS late or an estimated 1040 deposit was a day late or a dollar short.  There have even been instances where the representative is unable to find any reason as to why the agreement is defaulting.  Indeed, there have been cases where the IRS issues a default notice even though the taxpayer did every single thing they were supposed to do.  What is one to do now?  What is the next step?

First and foremost, immediately remedy the issues that resulted in the issuance of CP523 notice of intent to levy intent to terminate your installment agreement.  Assuming that you cannot prove with supporting documentation that the IRS is incorrect with regard to the infraction that gave rise to the default notice, you should immediately take action to cure the infraction.  In the case of late tax deposits, pay the late deposit penalties right away.  If any monthly installment agreement payments were not made, pay them immediately.  If a return was not filed, file it immediately.  If a return was filed late and a late filing penalty was assessed, pay the penalty immediately.

Remedying the foundational cause that resulted in the default may prevent the agreement from terminating.  However, primarily due to the fact that much of the IRS’s collection process is automated, the IRS’s seemingly inept system may still proceed with the termination process.

In a concerted effort to prevent the agreement from terminating, it is highly recommended to prepare and file a Collection Appeal request.  The appeal needs to be filed no later than 30 days from the date on the IRS CP523 notice.  This procedural appeal is a form of insurance against the automation of the IRS’s collection process.  A timely filed appeal should allow a human Appeals Officer, as opposed to an automated computer system, the ability to reinstate the payment agreement manually, if the automated system has not already done so, provided that every underlying reason for the default has been resolved in full.  It is certainly in a taxpayer’s best interest to have as many layers of protection and as many avenues of maintaining voluntary resolution as possible.

If the underlying reasons for the default cannot be immediately resolved in full, filing an appeal request may provide an additional few weeks to several months to get the issues remedied.  However, during this time, it is very important to remain current with all required ongoing federal tax obligations that are due as it is imperative that no additional liability is accrued.  It is also highly recommended to continue to make the monthly installment agreement payments despite the fact that the agreement is currently in limbo.  The ultimate objective is to demonstrate to the IRS that all the issues have been resolved and that the agreement should be reinstated given the fact that the IRS is in the exact same position it would be had the CP523 notice of intent to levy intent to terminate your installment agreement never been issued in the first place.

In the unwelcome situation where you are unable to remedy the circumstances for the issuance of the IRS default notice while remaining current with ongoing federal tax obligations within the 30-day period or prior to the appeals hearing, the agreement will terminate.  You will then be required to relive the nightmare of having to persuade and convince the IRS into allowing another payment agreement.  It is at this moment that all of the repressed memories of previously having to expose yourself to the IRS by providing every financial document imaginable, all while being in the vulnerable position of having to prove your inability to pay the ridiculous and unreasonable amount the IRS is seeking, and then having to negotiate a more reasonable fixed monthly payment, all come back to the surface.

Going through the process of securing an installment agreement with the IRS is not a pleasant experience to put it lightly.  Due to this, once one is finally secured, it is extremely beneficial to do everything possible to adhere to the terms of the agreement so it does not default, let alone terminate.  However, in the unfortunate situation where a default notice is generated, all hope is not lost, as there are several actions that can be taken that will minimize the risk of the agreement terminating while maximizing the probability that the agreement will be reinstated.

Resolving IRS issues can be extremely time consuming and stressful, and the outcome can have an extreme and lasting impact on your future financial health.  It is due to the high stakes involved that I highly recommend having a knowledgeable tax attorney with a substantial amount of experience resolving tax liabilities on your side to guide and assist you through the IRS’s collection labyrinth.

If you have received a CP523 notice or you simply have an unresolved tax liability, we have knowledgeable professionals on staff here at Fortress who will explain your rights and options to you.

Our Staff is Here to Help

David holds a Bachelor's Degree in Business Economics with an emphasis in Accounting from the University of California at Santa Barbara. In addition, David holds a Juris Doctor degree from Lewis and Clark School of Law as well as an LL.M. (master's degree) in Taxation from the University of San Diego School of Law. He holds a license in good standing with the Supreme Court of the State of Oregon. David Feldman has never been disciplined by the Oregon Bar Association.Prior to joining Fortress, David fought for taxpayers in collections with the IRS while working for a Low-Income Legal Tax Clinic located in downtown Portland, Oregon. It was here that he gained valuable experience representing taxpayers before the Internal Revenue Service, and developed outstanding tax-related negotiation and advocacy skills. David helped settle multiple tax liabilities for a fraction of his clients' debts before joining the team of tax professionals at Fortress. David's professionalism combined with his advanced tax-related education and front-line experience in tax negotiations have predictably translated into great things for his clients--most notably, protection from enforcement and many extremely favorable results.